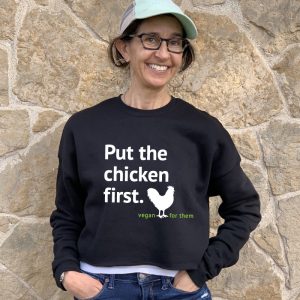 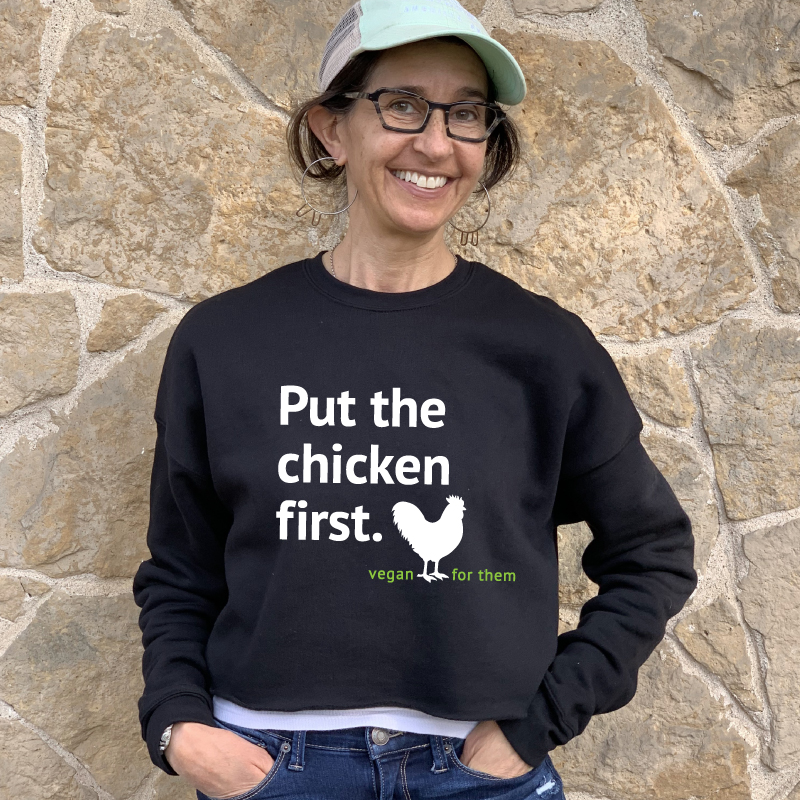 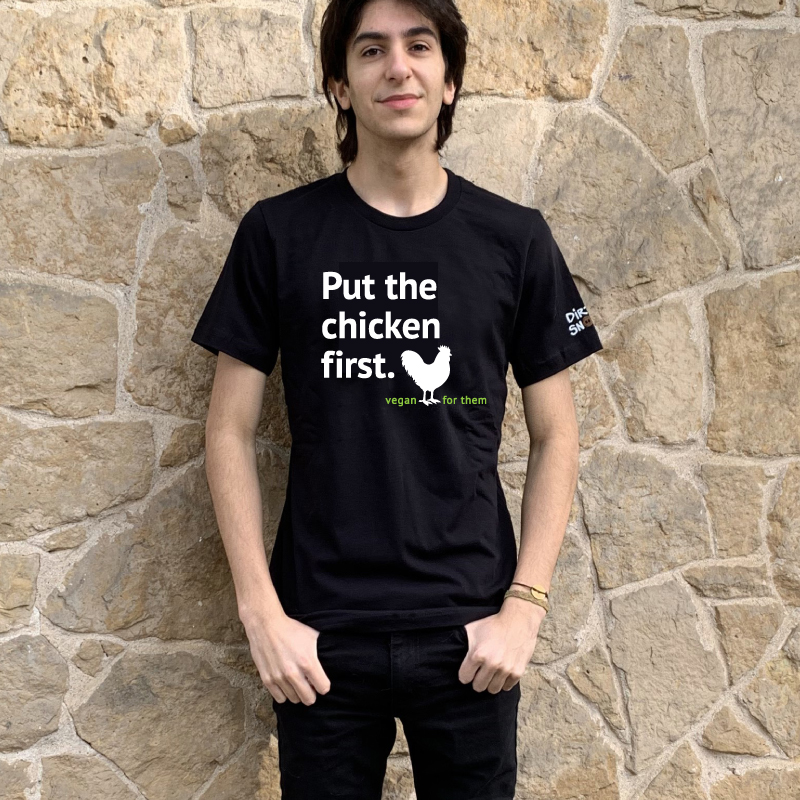 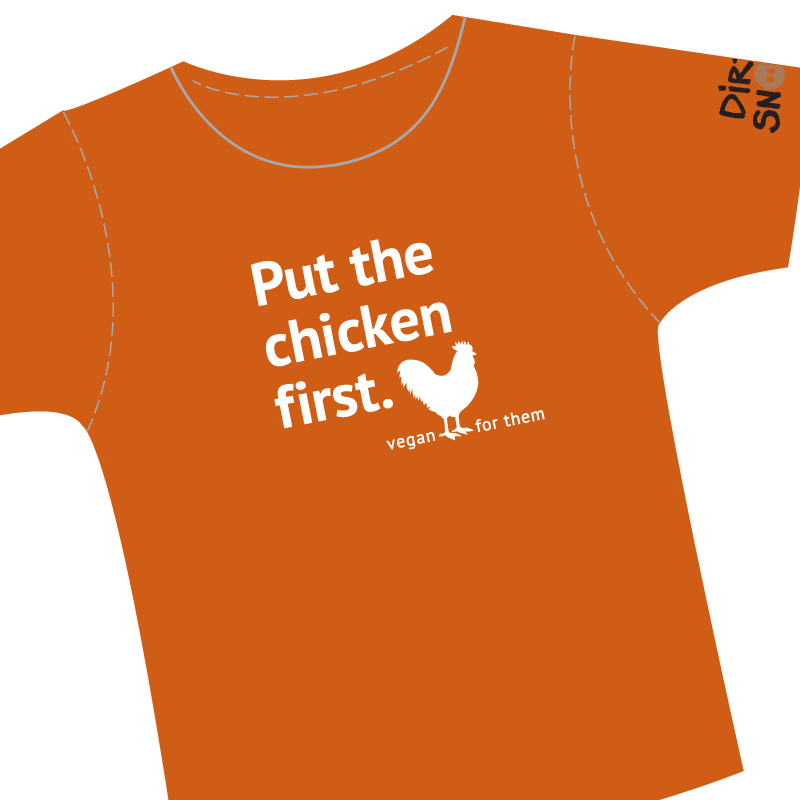 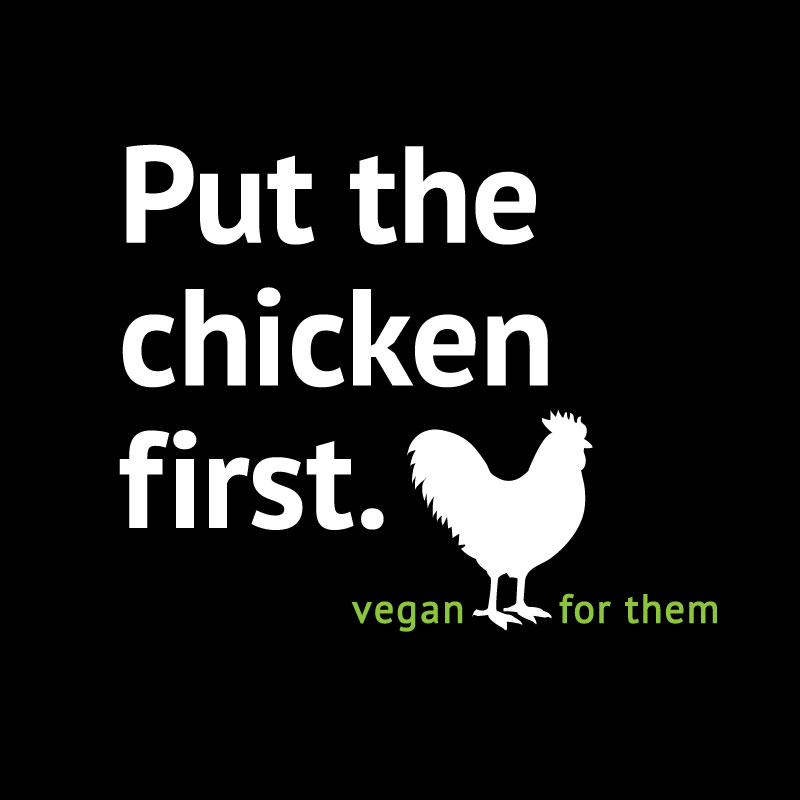 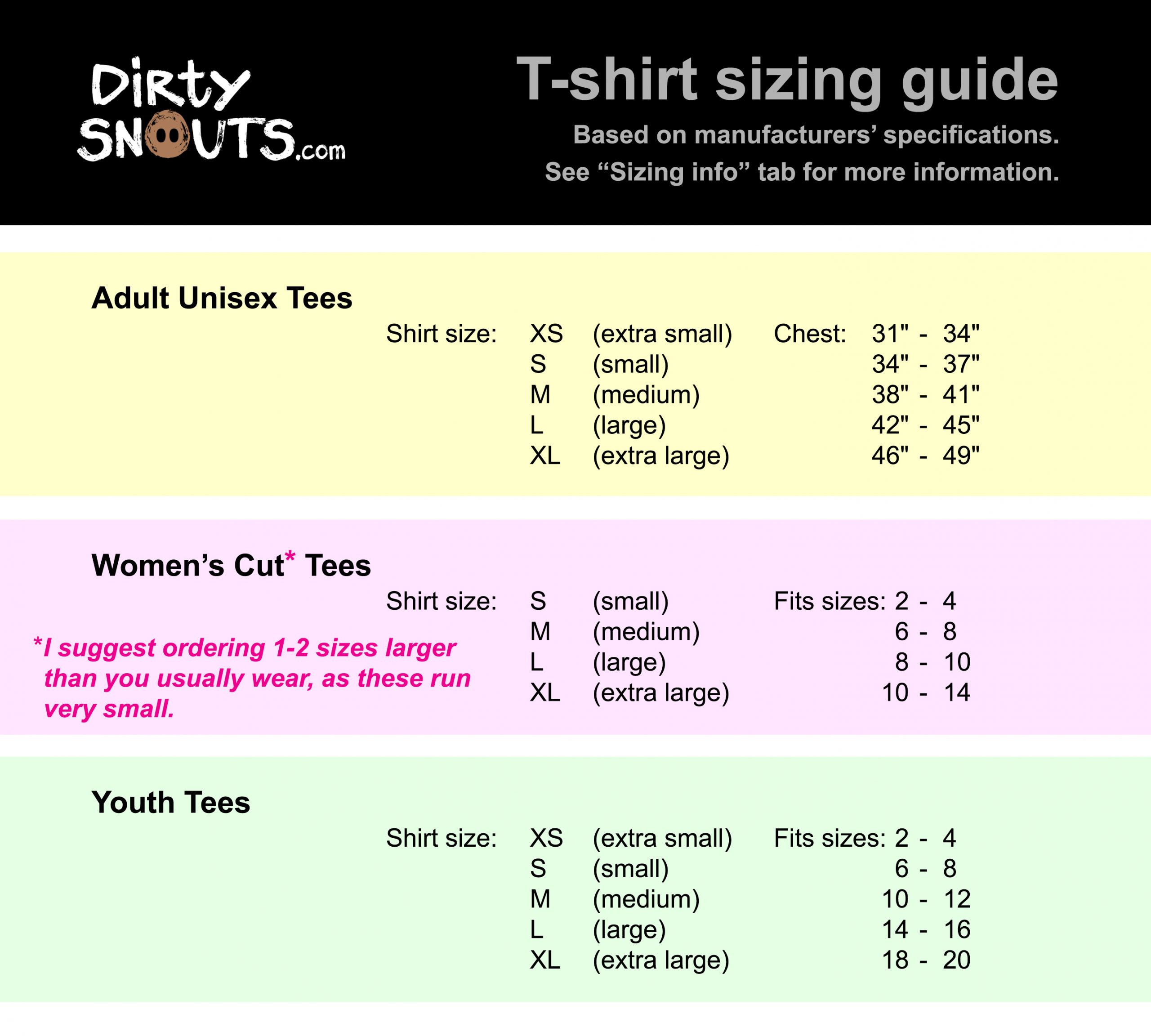 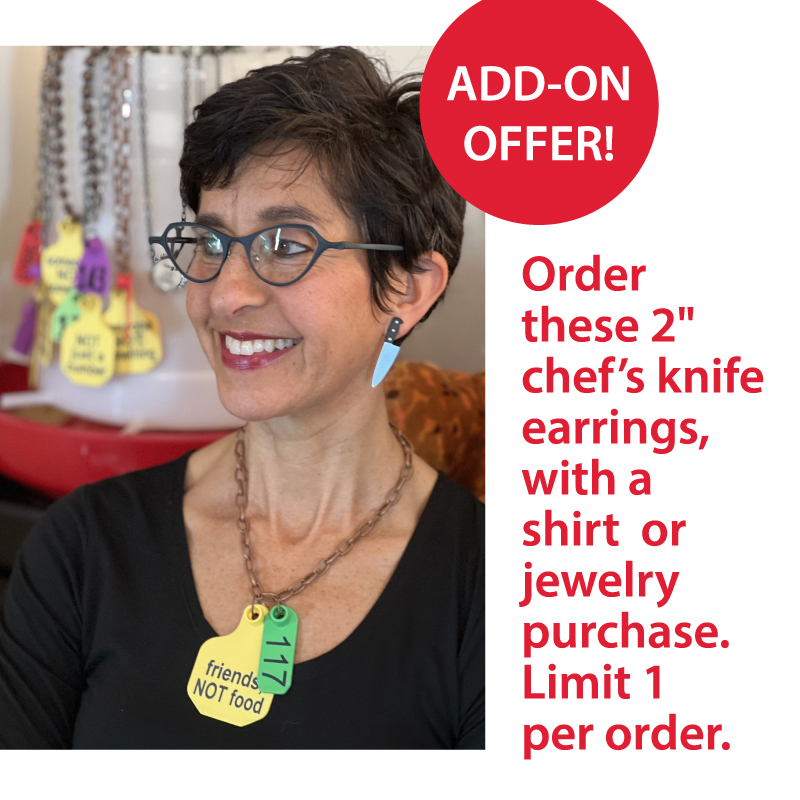 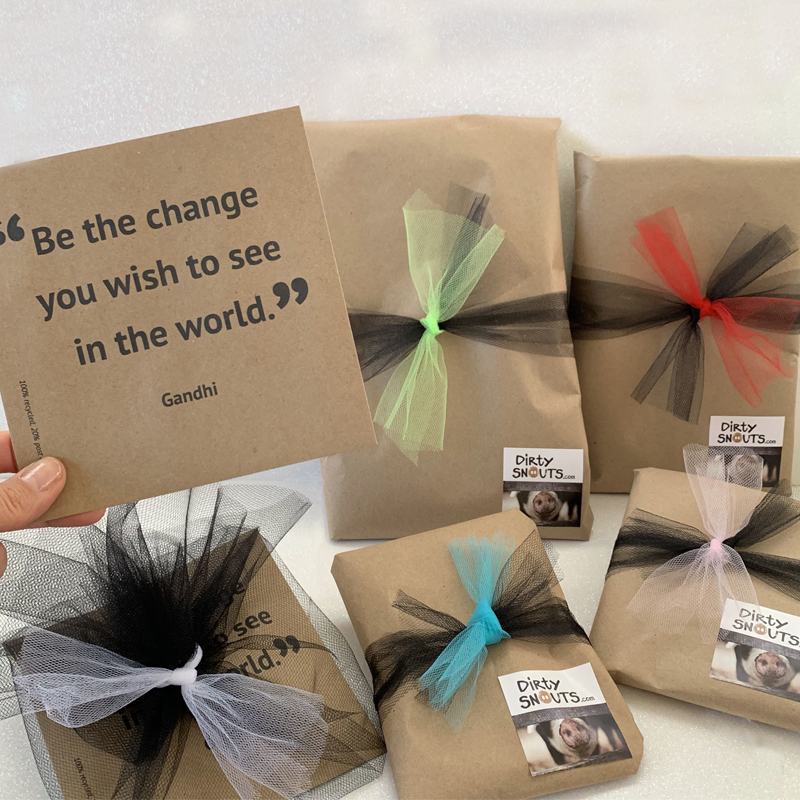 • Design printed on the front. Dirty Snouts logo on the left sleeve.

• T-shirts are 100% cotton. Fleece sweatshirts (currently out of stock) are cotton/poly blend. Adult (unisex), women’s cut and youth sizes. See the t-shirt sizing guide in the photo gallery and the tabs below for more detailed information.

• A minimum of ten percent of all sales is donated to farm animal sanctuaries. See the Animal Friends page for current sanctuary recipient(s).

• Size exchanges only. Please contact me prior to ordering with any questions.

NOTE: Shirt and ink colors may vary a little bit from what you see here, as all monitors and screens are different.

Want to know the story behind this design? This and other info are in the tabs below.
Does it really matter which came first? Either way, chickens are among the most exploited farmed animals on the planet.

Here are a dozen reasons to ditch chicken and eggs from your diet: 1) Factory-farmed chickens used for egg laying (“layers”) and meat (“broilers”) do not have enough space to exhibit any of their natural instinctive behaviors. These include dust bathing, preening, or even spreading their wings. In fact, broiler chickens have more room dead in the oven than they did while they were alive. Egg laying chickens have less space than an iPad. Restriction of these behaviors leads to extreme anxiety and even neurosis.

2) Chickens used in agriculture also suffer from painful bone breaks, diseases, and a host of other health problems. These result from being forced to grow at alarming rates at alarming speeds. Most of them live their entire lives cramped inside wire cages inside sheds containing tens of thousands of birds. They are forced to breath ammonia filled air that burns their throats and eyes.

(3) Males are by products to the egg industry and are disposed of after being born. They are thrown into macerators (big blenders) while still alive or tossed into large bags and suffocated because they are “useless” to producers and unsuitable for meat. These methods are legal.

(4) Egg laying chickens have been intensely bred to produce 20 times more eggs than they used to. We’re talking about 250-300 eggs all year long, compared to 10-15 per year during breeding season. Laying eggs is painful and hard on chickens’ bodies and they suffer greatly.

(5) We mess with their natural reproductive cycles for the sake of productivity. This involves rotations of 24/7 exposure to simulated daylight, followed by many days of starvation and total darkness. These practices are dont to encourage laying and molting.

(6) Female chicks endure painful mutilations like having the tips of their sensitive beaks seared off without anesthetic.

It’s not just factory farms that are concerning. While getting eggs from backyard chickens might seem okay, these operations and other “humane” practices are still problematic.

(7) Backyard operations support the egg industry that unjustly kills half its population just after birth.

(8) The hatcheries that supply newborn chicks deprive them of feed and water for up to 3 days before shipping them in boxes via the US Postal Service. This is the case if they’re going to a hobby farm, a feed store or directly to your house. And the same hatcheries supply them all.. The chicks are subjected to further suffering, injury and death.

(9)According to the USDA, free-range chickens need only to “have access” to the outdoors. Therefore, these windowless sheds housing thousands of birds – with a door at one end that’s opened briefly each day– meet free-range standards. Other claims like “organic,” “humane,” “cage free,” and “pasture raised” are also used to convince consumers that what they’re buying is ethically produced, when it isn’t necessarily the case. Even the most stringent welfare certification programs suggest, but don’t require, certain less horrific practices.

(10) Despite attempts by hatcheries and farm and feed stores to sex chicks and deliver females, there are inevitably roosters in the box. Many neighborhoods and cities don’t permit roosters, so these birds get dumped, abandoned, or killed.

(11) When they are killed, before they would die naturally, chickens are roughly shackled by their legs and hung upside down from a moving rail before being stunned in electrified water intended to paralyze them. Then they have their throats slit. Once they have bled out, they are submerged into scalding hot water for feather removal. Many birds are still alive when they endure this. These production lines of death can kill up to 8,400 birds an hour. The high speed process leaves much room for error and results in excruciating pain and suffering. The lucky chickens are “humanely” put upside down into metal cones and have their throats slit, or they’re decapitated, or they have their necks broken.

(12) Chickens have their own meaningful lives that you may not have known existed. They can solve complex problems, and even make decisions based on past experiences. They form friendships (recognizing up to 100 faces), they have unique personalities, and they nurture their young. Like other exploited animals, chickens are killed long before they would die naturally.

(13 – a baker’s dozen) If you’re wondering about the health benefits of eggs, know that it is illegal to advertise them as “nutritious” or “healthy” in the U.S. because eggs don’t meet the necessary criteria.

For more information about chickens, please see my Links page.

TEES: Select the Adult Unisex option if you’re going for a standard t-shirt style. These Bella + Canvas 4.2 oz. shirts are perfect for most sizes and shapes. Want a more fitted look?

Select the Women’s Cut. These are Bella + Canvas’ 4.2 oz. “Favorite Tee,” with a longer body, in addition to being more slender and feminine than the Adult Unisex and Youth options. I think they run very small, so I suggest you order 1 or 2 sizes up.

If you’re shopping for a kid or small adult, the Youth shirts are the way to go. They have a boxier, shorter cut than the Adult Unisex and Women’s Cut designs.

Youth shirts are Anvil 4.5 oz. shirts are 100% combed ringspun cotton for solid colors and a combination of cotton and poly for heather colors.

For best results, machine wash shirts inside out with like colors in cold water. Hang dry for the most eco-friendly option or tumble dry on low heat. Do not iron printed areas.

The average breast of an 8-week-old chicken is 7 times heavier today than it was 25 years ago?

1 review for Put the Chicken First